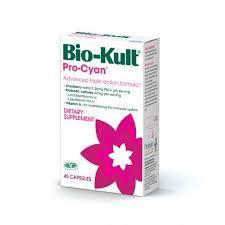 WHAT ARE URINARY TRACT INFECTIONS? Urinary tract infections (UTIs) are infections of any part of the urinary tract causing inflammation. Lower UTIs in the bladder are commonly known as 'cystitis'. In more than 80% of cases, they are caused by the overgrowth of the bacteria Escherichia coli (E.coli)38 originating from the digestive system or vagina39, or more rarely the bloodstream. Infections from the digestive system are more common as the pathogenic bacteria that take a foothold in the gut are able to move easily from the anus to the urethra. Probably, for this reason, UTIs are more frequent in women than men, with an estimated half of all women in the UK having at least one UTI in their life-time with 25% having recurrent episodes40. SYMPTOMS Frequent or urgent need to urinate Frequent need to urinate at night Pain/burning sensation whilst urinating Cloudy or unpleasant smelling urine Pus in the urine Bio-Kult Pro-Cyan is a triple action formula scientifically developed with cranberry extract (36mg PACs), two specifically selected live bacteria strains and Vitamin A which contributes to the normal function of the immune system and maintenance of the mucous membranes which can be found along the urinary tract.